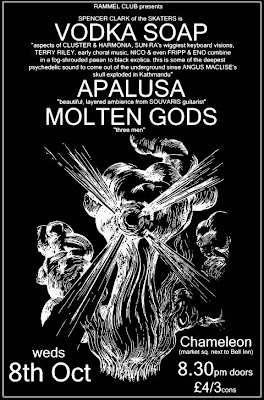 Vodka Soap or Voadka Soap is Spencer Clark's solo project. He is one half of The Skaters. He is a.k.a. Monopoly Child. He is so tall that he has difficulty finding trousers.

"Solo work from Spencer Clark of The Skaters that teleports straight into the nowhere zone with Native American rhythms and power visions, sudden spurts of percussive tape spool, choirs of alien visitation and what sounds like gamelan works scored for tiny pulses of light. With every jump cut the whole thing just seems to devolve into deeper, more primal alphabets until it sounds like the first music you ever heard, while your auditory canals were still connected to the source. Aspects of Cluster and Harmonia, Sun Ra's wiggiest keyboard visions, Terry Riley, early choral music, Nico and even Fripp and Eno combine in a fog-shrouded paean to black exotica. This is some of the deepest psychedelic sound to come out of the underground since Angus MacLise's skull exploded in Kathmandu." -- Volcanic Tongue

Apalusa is Dan Layton, guitarist with post-rock behemoth Souvaris, and he maketh music of an ambient nature. Little 'a' please. Here's what Norman Records had to say about his latest release 'Obadiah';

"Onto the delightful Apalusa on the ever useful Low Point label. Obadiah is packaged in a lovely letterpress 'arigato pack' in an edition of 300, so from the off it's a bit sexy looking like. Here we have 3 tracks of droney tunes which veer on the dark side of things. For me the obvious comparison here is some of the earlier Stars of The Lid music before they went more classical. Throbbing low end droney bass with some lush sounding feedback combine to make a really thundering warm sound. Listening to it on headphones it's proper taking me somewhere else as well which I like.... It's one of those floating in space records which you shut your eyes and imagine you're off there floating about minding your own business. Though there is a certain ominous presence on there hence me saying it veered on the dark side of things. It's fantastic though and if you're into drone music this is one of the best things I've heard in ages. Excellent!!"

You can find him at http://www.myspace.com/apalusa
And buy his records here http://www.low-point.com

Past masters of the forms of electronica, improv and whatthefuck (and including members of Flotel, Ultralame amongst others) have combined to form the trio of Molten Gods and they are HEAVY.
POSTER (ABOVE) BY DAN WARD
Email Post