The Chameleon (Old Market sq. / alleyway next to the Bell Inn, above Clinton Cards) Nottingham [MAP] 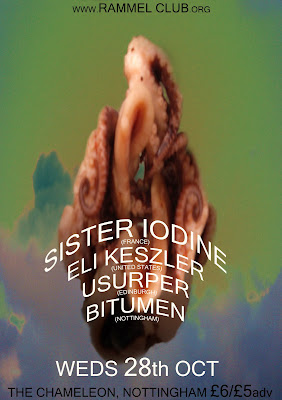 Founded in the early ‘90s, Sister Iodine spurt out savage gouts of fiery, primal guitar drizzle that could be taken as no wave, free rock, or JUST VERY FUCKIN LOUD depending on how you woke up this morning. They were invited to open Sonic Youth’s "Sentational Fix" exhibition last year which might give you some idea of the primal pounding you’re gonna get from them. New recorded bumpf out on such labels as Editions Mego and Premier Sang.

From Providence, USA. Keszler uses drums, along with crotales, bells, bowed metal, strings, and amplification to create a unique whirlwind of sound that balances sparse droning harmonics with intense, fast, free rhythms. He’s played with artists such as Jandek, Phill Niblock, Roscoe Mitchell and Loren Connors to mention a few. You ain’t likely to get a second chance to see this guy.

Great, skronking wasteland jams from Edinburgh. They’ve worked with Dylan Nyoukis (Blood Stereo) which only hints at the gibbering insanity that you can expect from them.

"She and Her made a pact over roaring flames early this year. It was from then on that Tuesday evenings were never the same again. And to date is the addition of the Wizzie rhythm. Together we distill."