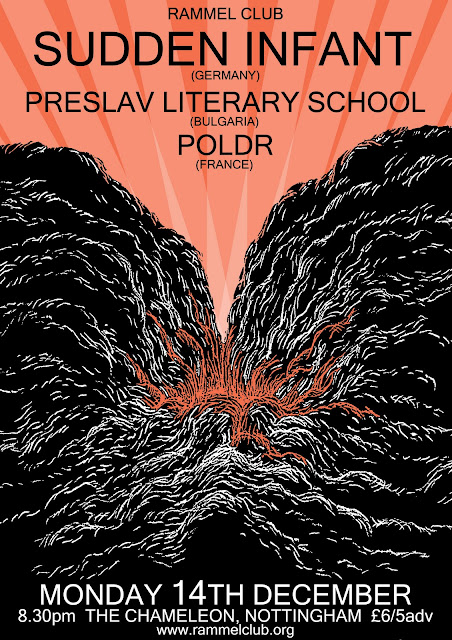 
The last time I saw Joke Lanz play was as part of Runzelstirn & Gurglestock at The Old Angel a few years ago. It was simultaneously one of the most hilarious and nauseating gigs I’ve been to. I still don’t think I could explain why exactly- the trussed up mutant deep-breathing onstage, Joke stalking the audience in a melted bollock face mask with a music box that seeped disquieting ambience and occasionally blossomed into roars of noise, it’s left a powerful aftertaste all these years later. Sudden Infant is his solo project...

"Joke Lanz aka Sudden Infant creates an unique blend of physical sound-poetry and dadaistic vocals, using contact microphones, prerecorded soundloops and noises.The result is abrupt Musique Concrète juxtapositions of spasmodic gibbering and a battery of disorienting electronics. It's a fragmented field of sound that comes to its own autonomy!

"Building elegant landscapes of organic drone and tape static, Berlin-based Preslav Literary
School has performed throughout Europe, taking with him a small army of cassette and
dictaphone players that lend a remarkably human sound to his process-led investigations of
decay, erasure and memory."

"Like William Basinski's Disintegration Loops, Preslav Literary School focuses on creating
something new and personal out of found sounds and dull, everyday happenings... wonder and
amazement is conveyed through the sounds and a sense of otherworldly significance is given to
the simplest of actions." (Sputnik Music)

"Since visual artist and experimental musician Poldr (Benjamin Laurent Aman) relocated from
France to Berlin, he has become one of the rising stars of the capital's established underground
scene, marking himself out as a performer who deals with texture, frequency and field recordings
with a distinct and unafraid ear. Founder of the cult Razzle Dazzle label, Poldr has collaborated
with Michael Northam and Shitty Listener."

"Drawing equally from a contemporary droned madness and a hypnotizing minimalism.... A dense
and harrowing musical experience" (Tomentosa Records)

Monday 14th December
The Chameleon
(Old Market sq / alleyway next to the Bell Inn, above Clinton Cards)
Nottingham
8.30pm start
£6 on the door / mail your name to tickets@rammelclub.org to get on the £5 cheaplist !!!
Email Post