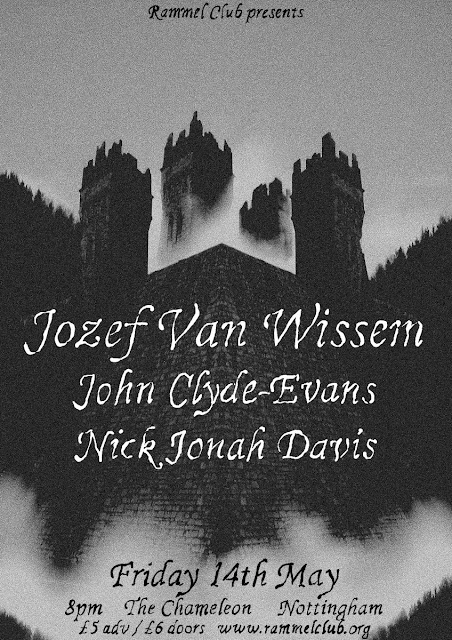 JOZEF VAN WISSEM
http://www.myspace.com/vanwissem
Whilst staying loyal to the traditional timbres and resonance of his instrument, Dutch lute player Jozef Van Wissem incorporates all manner of musical urges into his explorations, knitting together classical pieces, fragile modern melodies, electronics and processed field recordings and even deconstructing his own pieces by playing them backwards on occasion. This is no mere scholarly exercise however, prepare to be entranced and moved in equal measure.
He has also worked with Maurizio Bianchi, Tetuzi Akiyama, Gary Lucas and James Blackshaw with whom he formed the duo Brethren of the Free Spirit and The Wire Magazine called his solo lute cd Stations of the Cross “a small masterpiece”. Dig it.


JOHN CLYDE-EVANS
John Clyde- Evans used to play in lo-fi heroes Hood and after a period of travelling reappeared on the music scene producing some rapturously received cd-rs under the name Tirath Singh Nirmala. Informed by Indian devotional music as well as contemporary drone, minimalism and psychedelic techniques his is a uniquely personal sound and the Rammel Club is pretty damned chuffed that he’s playing live for us.
interview -
http://www.stylusmagazine.com/articles/interview/tirath-singh-nirmala.htm
NICK JONAH DAVIS
http://www.myspace.com/nickdavisguitar
You like a little Bert Jansch, John Fahey, Jack Rose? Then sit yourself down and let Nick Jonah Davis demonstrate why he deserves a place in your record collection. Fresh from playing with James Blackshaw and Max Ochs at the New York Guitar festival, Davis is a guitar player of considerable talent and his debut album has just been released by renowned NYC label Tompkins Square. We need a slap on the wrist for taking this long to get him on stage for your delectation.
Download Guitar Recordings Volume One here -
http://www.emusic.com/album/Nick-Jonah-Davis-Guitar-Recordings-Vol-One-MP3-Download/11676803.html