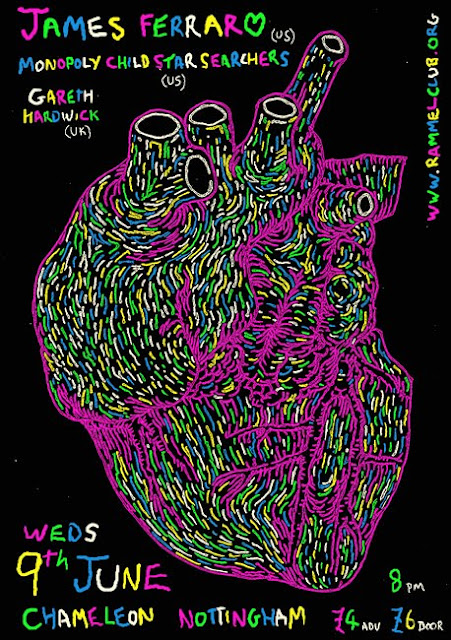 The kings of hypnagogic pop return to the Rammel Club, once known as The Skaters they now perform as separate entities, and will both be playing to projected films.

JAMES FERRARO (us)
Powered by cheap 80’s sci-fi and energy goo, Ferraro conjures up woozy washes of colour that sounds like your VCR lazily puking up spools of black tape whilst Castellari’s Bronx Warriors flicker on your TV screen to a warbling soundtrack of decaying synth’s, sickly soft rock and ominous disco pulses.

MONOPOLY CHILD STAR SEARCHERS (us)
Which way to the beach? Monopoly Star Child Searchers (aka Vodka Soap aka Spencer Clark) will show you, but be warned it looks like the oil slick has already hit, and thick tides of sticky gloop are consuming all those pretty melodies and only leaving traces of what was there before.

GARETH HARDWICK (uk)
Head honcho at the Low Point label conjures forth shimmering walls of sound that tickle the toes and then work their way up leaving you warm, dizzy and disorientated. Like the flu but nice.