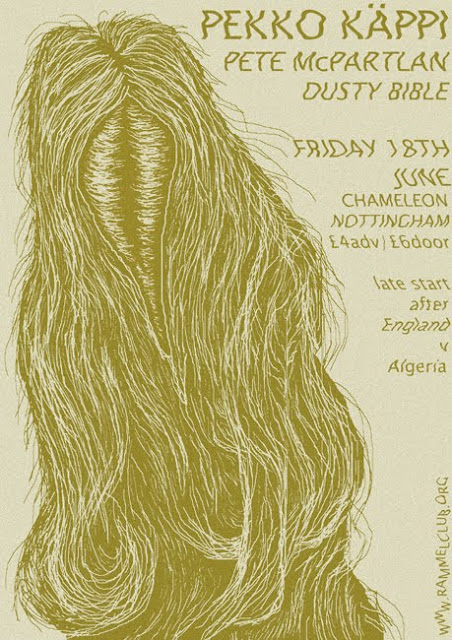 ********** LATE START = after England v Algeria (21.30hrs approx) **********
Seeing Pekko Kappi play a few years ago was one of those unexpected delights that come out of the blue on occasion and leave you glad that you dragged your sorry arse out of the house that night. So it’s with great pleasure that The Rammel Club presents him once again for your delectation.

Finnish musician Pekko Kappi crafts his intricate songs on the Jouhikko, a horse-hair lyre. As baroque and darkly welcoming as the dankest cemetery, they’re sinister and beautiful but leavened with a black sense of humour. He’s just as likely to appeal to all you folk heads as well as those of the gloomier persuasion whose record collection have a few Swans or Sun City Girls LP’s in amongst the racks. His latest LP on Singing Knives has garnered some killer reviews and shows his noisier and more experimental influences alongside the more traditional sounds.
. "Essentially, this is an album about artifice [...] sketching out an
. alternative ethno-musical reality [...] Whether real or imagined. It's still
. a seductive and rewarding place to spend half an hour." The Wire, March 2010
. "Don't be fooled, this is a full-on, fucked-up, inspired, deeply innovative
. record with its teeth firmly in noise, sound-sculpture, improvisation and
. great song writing. " Foxy Digitalis, 13th of January 2010

PETE MCPARTLAN
http://www.petemcpartlan.co.uk/music/silt/
Grains of puredata, sieved through a laptop and gently arranged by Nottingham artist Pete McPartlan. For those of us that spent much of the late nineties in a semi-comatose state wondering whether that noise oozing out of our speakers really was a sample of a melting bee-hive or actually some patch of intricate complexity devised by some nerd in Sheffield, Silt is gonna be a revelation.

DUSTY BIBLE
A guitar, a mouthful of bourbon and dirt gives painful birth to some of the filthiest blues this side of Sneinton.