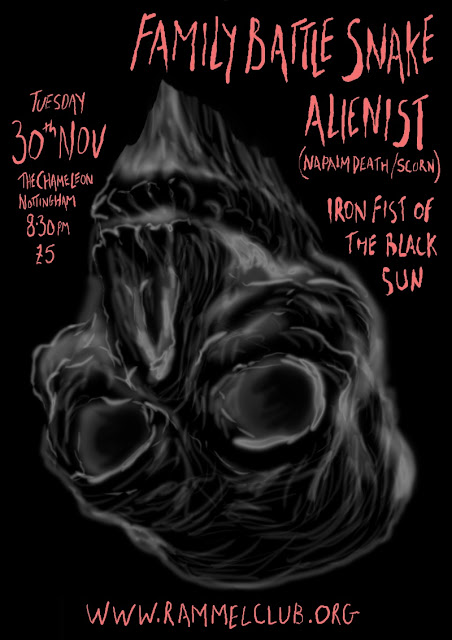 It’s the last Rammel Club of the year so come down and enjoy some lobe mangling sounds
before you are overwhelmed by the bellowing of Noddy Holder
and choke upon the minced meat of Christmas.
FAMILY BATTLE SNAKE
The last time I saw ther ‘Snake play I ended up rocking back and forth in front of the stage like a mentalist whilst his heavy synth barrage wreaked havoc all around me. Man, it was loud. If you’ve thrilled to th...e cosmic sounds of Emeralds then you’ll find plenty to enjoy here but there’s a colder, darker edge that hints at the frostier reaches of Krautrock (I’m thinking Kluster, early Tangerine Dream and Conrad Schnitzler).

His appearance at the recent LAFMS festival with Joseph Hammer showed a different side to the FBS sound being a carefully constructed voyage into microscopic worlds. Whatever you get, it’ll be worth the ticket and seeing as he runs the Pan Record label you might also be able to purchase some exquisite looking LPs afterwards.
http://www.myspace.com/familybattlesnake

ALIENIST
At least two thirds of the Rammel administrative committee are almost wetting themselves about the fact that we have Nicholas Bullen playing this gig. A founding member of NAPALM DEATH he also birthed SCORN - who pretty much invented that dubby dark-ambient sound that we dig so much in the ‘90s. ALIENIST promises intricate ambient passages, walls of brain scrambling noise and a whole lot more.
http://en.wikipedia.org/wiki/Nicholas_Bullen

IRON FIST OF THE SUN
One of the highlights of Birmingham’s Radio Black Forest event this year was seeing IRON FIST OF THE SUN pound an unsuspecting audience into submission with a coruscating roar of scree, eye exploding visuals and a real bad attitude. There’s a touch of Prurient about his sound but really; if you’ve had a bad day/month/fucking year then come and stick your head in our speakers. I can pretty much guarantee by the end of this set you won’t be able to feel a thing.
http://www.myspace.com/ironfistofthesun