It's January 2013... we all suffer from ASDA (aka Seasonal Affective Disorder), we're all skint and getting rained on plus there is nothing going on. Tarraaa, RAMMEL CLUB to the rescue: we have some top quality aural treats for you at a discount price (like it's 1999): 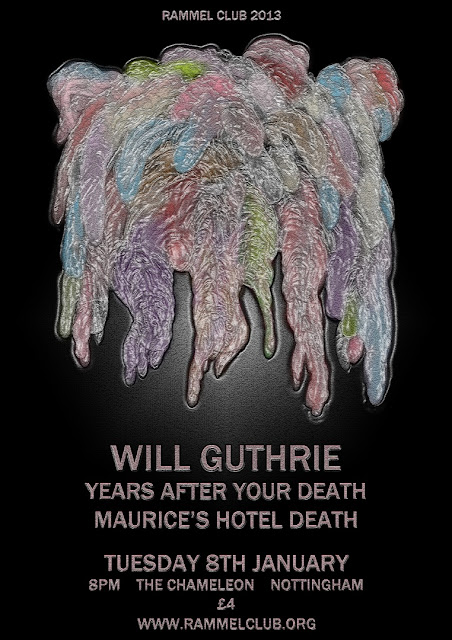 YEARS AFTER YOUR DEATH
http://yearsafteryourdeath.com/
https://soundcloud.com/yearsafteryourdeath
After hard graft and too many sleepless nights Kingsley Ravencroft (half of Formication, currently on hiatus after over a dozen releases) presents his solo release "The Unlit and Unlovely".
File under melancholic, introspective, icily stark, monolithic, impenetrable, trance inducing stuff - born of isolation and scratched into the surface of what came before to pull apart the old wounds and hopefully inflict some new ones...

MAURICE'S HOTEL DEATH
http://lcpmusic.bandcamp.com/
Collected field recordings, samples and synth loops worked into internal sensations and derelict tracks, like being followed though there's nobody about. She's knocked us down before with DJ sets so we're delighted to discover a fledgling artist - recently signed to Rano & with upcoming self-release tape "hoping fear will create good".