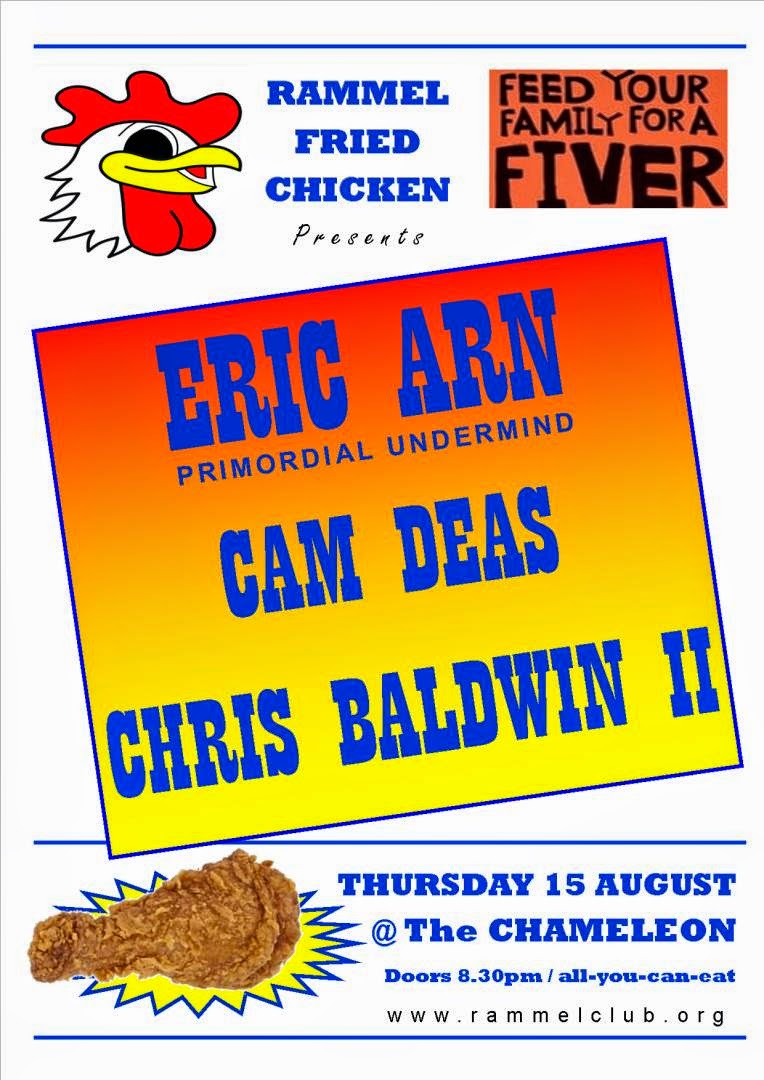 RAMMEL CLUB PRESENTS... the gift of music with

► ERIC ARN
https://soundcloud.com/eric-arn-sounds
Guitarist Eric Arn and his Primordial Undermind collective have tirelessly mined the nether regions of avant-rock for two decades. Before the Undermind, he cut his teeth in Connecticut's shadowy basement psych legends, the Crystalized Movements.
Since settling in Vienna, Austria in 2005, Eric has continued with the Undermind as well as playing solo, in duos with Stefan Kushima/Cruise Family and Vanessa Arn, as a member of the Vienna Improvisors Orchestra, Tempel Solaire/Tempel Lunaire, the Magic Carpathians, Marco Eneidi's Nenuvi Orchestra, and the Vienna Improvisers Orchestra.
His first solo album, 'Points of Fissure' was released in April 2013 on Feathered Coyote.

► CAM DEAS
https://soundcloud.com/camdeas/live_processing_01
https://soundcloud.com/camdeas/live_processing_02
https://soundcloud.com/camdeas/live_processing_03
https://soundcloud.com/camdeas/the-wagon-excerpt
Cam Deas, born and now based in London, has been exploring a so-called ‘Post-Takoma’ terrain through his 12 string acoustic guitar explorations, working between composition and free-improvisation employing a legion of extended techniques. His last solo full length album, Quadtych, was hailed as 'a major UK guitar statement' by David Keenan (Volcanic Tongue/The Wire) and 'a quantum step forward after a decade of Fahey acolytion' by Keith Fullerton Whitman. For the past 5 years Deas has toured heavily across Europe, performing hundreds of concerts. He has been heard collaborating in the studio and live with the likes of Steffen Basho-Junghans, Ignatz, Chie Mukai, Jack Allett, Sheldon Siegel, C. Joynes, Chuck Johnson and many others.
This tour will see Deas further his sonic exploration of the 12 string acoustic guitar, using it as a sculptural wooden frame to an electronic music. The exploratory acoustic sounds will be processed and manipulated through a series of analogue synthesis patches to create evolving sonic environments, through a structurally composed part-improvisation, manifesting in dense harmonic and resonant textures, uncurbed percussive attacks and swirling rhythmic patterns in an attempt to connect the sound worlds of Takoma-school guitar and electro-acoustic music in a purely live situation.