Rammel Club and Harbinger Sound are thrilled to present a rare PAIN JERK and RUSSELL HASWELL collaboration, following up on their 2012 Nottingham appearance/album. 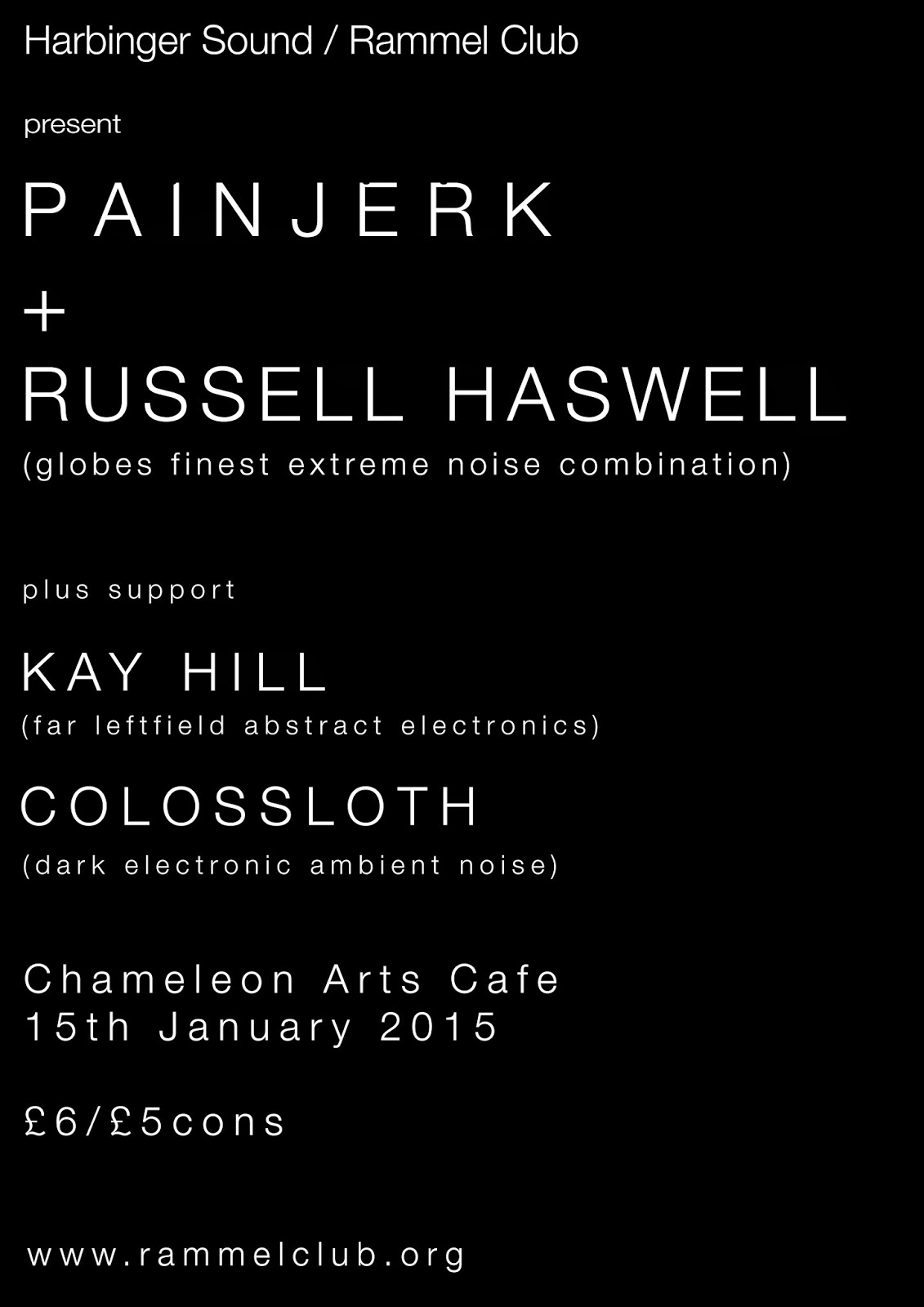 PAIN JERK and RUSSELL HASWELL met at the legendary Tokyo venue 20000 volts in 1997. Haswell and Pain Jerk stayed in touch with the intent to collaborate at some point in the future. This was eventually realized in 2012 when they played together at the Rammel Club. The Nottingham performance was recorded and both parties took away the results in addition to their solo recordings to re-edit and re-send, back and forth, for 2 years, re-editing, re-contextualising these original sounds.
Last year Editions Mego released the long awaited collaboration CD 'Electroacoustic Sludge Dither Transformation Smear Grind Decomposition nO!se File Exchange Mega Edit'

PAIN JERK is a noise music unit run by Japanese musician Kohei Gomi (五味浩平 for our Japanese friends). He started home-recording in the 1980s and under the PAIN JERK moniker he became one of the most prolific and influential noise artists of the '90s. Gomi is one of the leading figures in the "dynamic" style of Japanese noise or Japanoise and is also the owner of the noise label AMP. He's a member (along with T. Mikawa and F. Kosakai of Incapacitants) of the noise supergroup Gomikawa Fumio.

RUSSELL HASWELL is one of the most uncompromising multi-disciplinary artists of the past two decades. He has exhibited conceptual and wall based visual works, video art, public sculpture, as well as audio presentations in both art gallery and concert hall contexts. Extreme Computer Music is one specialized area of activity (hurray!).
His considered, grievously wrought explorations of digital sound transcend genre boundaries, and his past collaborators – including Aphex Twin, Pan Sonic, Jake and Dinos Chapman, Florian Hecker, Earth, Popol Vuh, Whitehouse, Gescom and many more are an accordingly disparate bunch.

Local Nottingham artist Benjamin Hallatt has been steadily developing his abstract approach to noise and electronics for over ten years now with the most recent outlet being his live and recorded output under the name Kay Hill. With releases this year on his own { A N T I } label and Cremation Lily’s ‘Strange Rules’ label, the Kay Hill sound is a fairly stripped down mesh of overdriven 4-track tape textures, incidental anomalies, amplified static friction and resonant drones. The final outcome is a project that sits comfortably somewhere between the more refined worlds of the sound artists and the sonic extremities of the noise culture, all orchestrated by a working class lad from Carlton.

:::: THURSDAY 15th JANUARY 2015 ::::
at The Chameleon Arts Cafe - Nottingham
(Old Market sq / alleyway in between Cardzone and Gamestation, 1st double door at the left and then straight up the stairs)