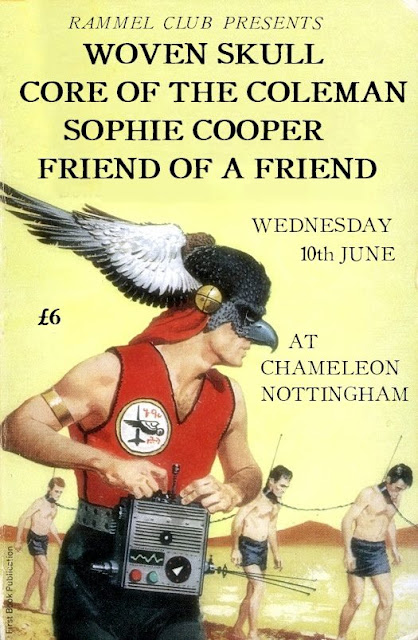 "In 2008, Woven Skull first began playing together in a house owned by two of the members and located at the foot of Sheemore (a hill where two factions of fairies clash in an annual battle) in the empty sparse countryside of northwest Ireland. These atmospheric surroundings helped to forge their music which has been described as “minimal, repetitive, distorted, ugly and beautiful in one”. The trio spent several years experimenting with combinations of instrumentation, household objects, kitchen utensils, seashells, footsteps, chimes, recordings of cats purring and frogs mating while developing a sound that after a recent set was described as “a Turkish Velvet Underground.”
Woven Skull have recorded in dark haunted woods, beside bottomless lakes, and in the attics of abandoned houses. Their upcoming LP, “Lair of the Glowing Bantling,” is their first studio album and captures a sound that's more in line with their live performance than past releases which have been a mix of lo-fi practice tapes, outdoor recordings and segments from collaborative sets"

"The solo project of sound artist Jorge Boehringer, consists of continuity and discontinuity for viola, voice and circuits on the border between order and chaos.
Sonically diverse and at times explosive in texture, Core of the Coalman emphasizes the physicality of sound in its synesthetic relationships between ear, mind, and environment.
Performances including feedback-driven yodel triggers, descending tympanic pressures implying sexual interface, and extended upwardly-mobile Carnasitic arrays, with ornaments, have been featured on all kinds of concert programs."

“I hear Cooper slipping off the edge, detaching from the original premise and then losing it via the distraction of side roads and epiphanic tangents. Delicate shapes spiral out of control like music box ballerinas set spinning too fast, and despite the aquamarine gleam that covers the folken flutter of “Klias Wetlands” in its opening few minutes, an inky distortion still manages to find a gap in the seams through which to spill, turning the music into a beautifully bad origami of wrong folds and symmetry offset. I am thoroughly enlivened by the freedom of her music. Every equilibrium disturbance is an invitation; an opportunity to reconsider and repurpose, free to be indulged until the song bloats to the point of bursting. Excesses of warmth and echo are to be trusted as friends – they are beauty enhancers, coaxing melodies out of restraint until they cover themselves in wild frocks of found sound, accordion ribbons and sung notes that rise and fall like the very breaths that bore them. I shut my eyes and slacken myself, permitting Our Aquarius to lead me forth without hesitation or question.”

► FRIEND OF A FRIEND
https://soundcloud.com/friendofafriend

“Friend of a Friend is the solo project of Alastair D. Smith, who also plays in Nottingham band Blunt Mountains. Friend of a Friend’s music assembles elements of the organic and the artificial – analogue synth drones meet stringed instruments, found sounds, and digital pulses. These sources coalesce to form an end result that feels like the past and the future bleeding into the present."


WEDNESDAY 10th JUNE 2015
at The Chameleon Arts Cafe - Nottingham
(Old Market sq / alleyway in between Cardzone and Gamestation,
1st double door at the left and then straight up the stairs)