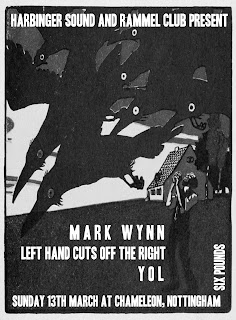 ► MARK WYNN
"After having the NME announce him as "one to watch for 2015" Mark Wynn promptly quit music. Harbinger Sound spent the summer coaxing him out from early retirement and the result is "The Singles" album. A compilation of 18 tracks culled from two years worth of limited self-released CDs. Wynn's scattershot avant-skank acoustic gobshitting blends despair, bleakness and humour. It then pulls apart any worthless comparisions to The Fall, Wreckless Eric, Patrik Fitzgerald, etc with his irreverent, awkward but smart lo-fi songs. After spending the autumn touring with the Sleaford Mods , Wynn is now back in the game as one to watch for 2016"
http://markwynn.blogspot.co.uk/
https://markwynn.bandcamp.com/

► LEFT HAND CUTS OFF THE RIGHT
"Left Hand Cuts off the Right is the moniker for sound artist and experimental musician, Robbie Judkins. The project is an outlet for exploratory methods and composition most often found in music concrete, minimalism, noise and improvisation. His work has been featured in the Wire Magazine, NTS Radio, Resonance FM and at the University of Central Lancashire."
https://lefthandcutsofftheright.bandcamp.com/

► YOL
"Yol’s live deliveries appear to be born from a dysfunctional ability to express rage at planet Fuck Up. Part Tourettes sufferers spastic squawks, part scraped fork tine on rusty pipe, part mop bucket clatter. To see him live is to see his neck tendons stretch to Deirdre Barlow proportions whilst screaming seemingly stream of consciousness words at a 90 degree angle to the floor. Bent double he attacks bits of tin and kitchen utensils with a rabid intensity that makes you wonder if he is indeed in the midst of a convulsive fit. "
https://yolnoise.bandcamp.com/ 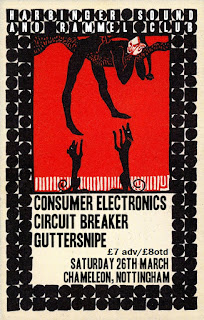 
► CIRCUIT BREAKER
"Terrifying honed to a tee – this London duo dip between the fall, suicide and the pop group for an aural assault full of post punk gall. Cold drum machines meet whirling, near psychedelic synths in a way that martin rev or even silver apples would be proud of before flicking to brutal synthetic attacks all under sociopolitical (yet never pandering) barked and sung lyrics. this is the fevered nightmare of the psychedelic revival – completely inorganic and overwhelmingly powerful and loud mutated post punk."
http://circuitbreakerband.bandcamp.com/

► CHICALOYOH
'Chicaloyoh is Alice Dourlen’s solo project. Creating music between soundscape exploration and intimate contemplation, Chicaloyoh is a mix of guitar, keyboards and percussions from distant and various horizons. Chicaloyoh is a one woman band that will attract those who like the priestess singings of Inca Ore or Nico. Together with High Wolf she plays as Woodoo Mount Sister, who toured Europe and the USA last summer. Chicaloyoh has already released tapes on Bumtapes, Dial square tapes, Clay Ruby’s (from Burial Hex and Second Family Band) label Brave Mysteries, and more recently, full-length LP's on the French label Faunasabbatha and Shelter Press.'
http://chicaloyoh.bandcamp.com/

► CHEVAL SCINTILLANTES
'Cheval scintillantes is the solo project of Sophie Bernadou, She plays cello in very personal ways, she uses some delays and plays also pizzicato. If you like the tragic atmosphere in the movie of Roman Polanski "La jeune fille et la mort" you will like it for sure! drama vibes and Chills assured! She released her first tape on the english label "Was ist das" few month ago'
https://www.youtube.com/watch?v=uvpD0jbjWH8