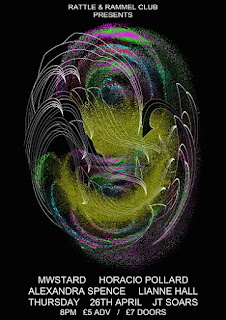 Alphabetical order for now, running order to be decided at a later date (probably on the night)

ALEXANDRA SPENCE
'Both my performance and installation work is concerned with the idea of listening as an active practice. I like to create site-specific work and am inspired by the idea of ‘collaborating’ with one’s environment, understanding the relationships between the listener, the object, and the surrounding environment to be a kind of communion or conversation. I am inspired by everyday sound, and how our individual notions of place and identity are shaped and mediated through these sounds. My work favours small sounds, hidden sonic processes, subtlety, quietude and unusual sound sources.
My performances are electroacoustic and improvised - utilising noise, silence, subtlety and unusual sound sources to create ambient soundscape environments. I perform with an array of usual, unusual and DIY sound sources including: computer, field recordings, cassette players, tape loops, feedback, sine tones, voice, clarinet, no-input mixer, radio, objects, electromagnetic coil pick-ups, and contact microphones.
Much of my recent installation work is interested in using sound as a means to reveal the vibrancy within domestic objects and surfaces that are generally perceived to be inanimate in a pursuit to better ‘know’ the objects, subjects, places and processes that surround us.
live recordings from some recent performances: http://alexandraspence.net/Destroy-Vancouver & https://soundcloud.com/alexandraspence/live-at-black-box-sound-series & https://soundcloud.com/nick-ashwood/alex-nick-dale
video documentation of some of my recent installation work: http://alexandraspence.net/Inanimate-dialogue & http://alexandraspence.net/Listening-to-the-sea-from-at-least-twelve-points-of-hearing '


HORACIO POLLARD
"Pollard is one of the few creative people on the globe (Romain Perrot aka Vomir is another) who understands that “good taste” is the very death of art, and as such he needs to be cherished like a Siberian Tiger, albeit one whose pelt is made from artificial dayglo blue fur."  Ed Pinsent,The Sound Projector. Horacio's music is released on Drid Machine - home to bands like Noxagt, No Balls and Sightings.
http://horaciopollard.blogspot.co.uk
https://www.youtube.com/watch?v=Vqlyd9yLMYk&t=170s


LIANNE HALL
You know Lianne Hall ? One of John Peels favourite voices, brilliantly crafted songs that are transformative, pushing Alt Folk into dance. But much better that that sounds. Over from Berlin.
http://www.liannehall.com
liannehall.bandcamp.com