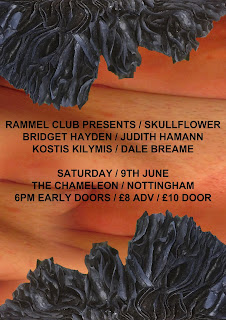 Skullflower
Over the last three decades Skullflower have drawn further and further in realms of the sublime.  Matthew Bower has been at work since the early years of the contemporary UK underground/noise scene based around the Broken Flag label in the mid 80's, and over that time Skullflower has become one of the most significant and influential bands within and beyond that world. But Bower has tended to remain on the periphery, on his own trajectory. It’s difficult to place the work, transcendent in many senses, but when people speak of psychedelia there are few, if any who approach the heights of the current Skullflower line up of Bower and Samantha Davies. https://skullflower.bandcamp.com/

Judith Hamann
Judith Hamann is a cellist from Melbourne, Australia. Her performance practice stretches across various genres encompassing elements of improvised, art, experimental, and popular music. Currently her work is focused on expressions of immersion and saturation: explored through durational, spatialised and electroacoustic approaches to sound, as well as an examination of psycho-physical materials and manifestation of 'shaking'.
She has worked with artists including Oren Ambarchi, Jürg Frey, Graham Lambkin, Alvin Lucier, Toshimaru Nakamura, The Necks, Michael Pisaro, and La Monte Young.
judith-hamann.com
soundcloud.com/judithhamann

Bridget Hayden
Bridget Hayden is a musician and visual artist who is perhaps best known for her work with the experimental ensemble Vibracathedral Orchestra. Her solo work over the last decade and more channels a contemporary form of the blues, the blues as seen by the likes of Loren Connors. Seemingly wordless vocals meld with smears of guitar - it can be a tender, beautiful music appearing to be drenched in sorrow.
http://notwavingordrowning.co.uk/
https://bridgethayden.bandcamp.com/

Kostis Kilymis
Kostis Kilymis is a Bristol based artist working with feedback systems and the notion of representation - in musical contexts or otherwise. Sounds based on noise, electroacoustics & field recording. He also run the Organized Music from Thessaloniki label. He's collaborated with the like of Stephen Cornford, Phil Julian and Sarah Hughes. Recent performances have seen a move towards incorporating spoken word elements.
http://kostiskilymis.com/
https://soundcloud.com/kostiskilymis

Dale Breame
First gig of this new self-titled project from a face you'll probably be familiar with if you've been to previous Rammel Clubs. Big slabs of noise from a bass guitar and effects.
https://dalebreame.bandcamp.com/