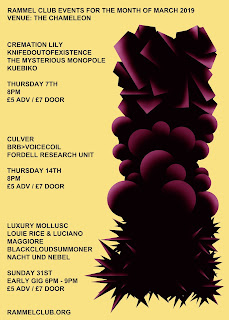 The Cremation Lilly & Knifedoutofexistence set(s) will be one long joint performance, with Knifedoutof starting and CL ending.

Cremation Lily
Cremation lily was formed in 2009 as the solo project of Zen Zsigo, and whilst still founded in industrial music the project has expanded it's sonic scope significantly over time. Comparisons could be drawn to Prurients more ambient work, and perhaps to the likes of Leyland Kirby within it's melancholic atmosphere.
https://cremationlily.bandcamp.com/

Knifedoutofexistence
"Knifedoutofexistence music seems ingrained with a struggle to communicate freely and coherently: synthesisers choke on chunks of distortion, feedback bleeds across field recordings of public spaces, noise and tannoy slapback are draped, like burdensome chainmail, over feverdreamt screams and lethargic croaks of defeat."
https://knifedoutofexistence.bandcamp.com/

Culver
Culver is the harsh drone project of Lee Stokoe, which has been running for more than 20 years. Both Culver and Lee's Matching Head label are paragons of the modern British underground noise scene. There are few who appear to be able to match the focus and density of Culver. We're really looking forward to hearing this through Chameleon's "oversized" sound system.

BRB>Voicecoil
"Kev Wilkinson is something of a local legend, having pursued his BRB project in various guises on and off for the past quarter century. Starting out as Big Road Breaker and also being the brains behind the Muza Muza label (that released the first Jazzfinger output all those years ago, plus Ashtray Navigations and many more), his identities have gradually evolved over time though his predilections have remained the subsonic, the gargantuan (sonically) and the indefinably disturbing." - Tusk Festival
https://soundcloud.com/brb-voicecoil

Fordell Research Unit
Fraser Burnett's Fordell Research Unit music is primarily based in drone, often with a duality at it's heart - being equal parts tender and harsh, occasionally with these two states being presented simultaneously. More recent FDM material sounds as if it draws as much influence from someone like Klaus Schulze, as Maurizio Bichani.
https://soundcloud.com/fraser-burnett

Luxury Mollusc
Atmospheric harsh scrap abuse from Ireland. 'Something eerily profound is being communicated here, but with a swollen tongue, so true meaning is never quite deciphered.'
https://luxuriousmollusc.bandcamp.com

Louie Rice & Luciano Maggiore
Over the last couple of years Louie and Luciano have been collaborating on a series called ‘NO-PA / PA-ON’, which focuses on realisations of artist scores. They’ve performed scores by Alvin Lucier, Robert Bozzi, Ken Friedman, Emmet Williams and Walter Marchetti, as well as some of their own creation.
"We used the phrase - unrewarding task based actions - for a while, but the project is quite rewarding so we dropped that."
Luciano Maggiore (Palermo) lives and works in London. Active musician in the field of electroacoustic music, in recent years he has developed a strong interest in the mechanisms of sound diffusion, using speakers and several analogue and digital devices (walkmans, CD players, tape recorders) as principal instruments. His interest is focused on the architectural and psychoacoustic as well as dynamic and directional values of sound with a strong emphasis on fixed sounds. His works are published by Balloon & Needle, Boring Machines, Consumer Waste, Hideous Replica, Palustre, Senufo editions, 1000Füssler, Triscele Registrazioni and Tulip records.
"Louie Rice is perhaps best known as a member of VA AA LR, with Vasco Alves and Adam Asnan - a group largely focused on the tactile properties of sound and performance based events – as well as under the radar solo and collaborative works. As a producer for the Hideous Replica label and one of the organisers of the Hideous Porta series of events, he has shown his sharp taste in electro-acoustic music, abrasive textures and eclectic synth-based work" - Organized music from thessaloniki
https://soundcloud.com/louie-rice
https://soundcloud.com/lucianomaggiore
https://hideousreplica.co.uk/no-pa-on

Nacht Und Nebel
As ever, every sound you’ll hear is originally made using a cello and is manipulated in a variety of ways into ‘a combination of earthy drones and facesplitting noise that comes front-loaded with grumbling unease, prickly barbs of interference and obnoxious vibrations.’ ‘If you've ever seen Ken Russell's extraordinary film ‘Altered States’ in which William Hurt spends so long inside a series of sensory deprivation tanks that he physically regresses into a monkey, you will be able to imagine the sorts of sounds present. These are the sounds your brain starts to make when it hasn't seen, heard, smelt, tasted or felt anything at all during fifteen straight hours of floating in a watery void with only the slight reverberation from your heart for company.’
https://nachtundnebel.bandcamp.com