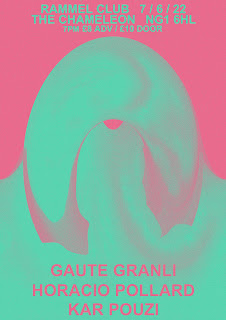 'Norwegian musican Gaute Granli used to play guitar and shout in Skadne Krek and Freddy The Dyke. Now he focuses mainly on his solo project where he explores a range of abstract and bizarre territories. He combines chanting, guitar, a range of effects with analog sampling and creates a dark and industrial sound. The music is freely improvised as well as composed.' Granli appears to inhabit the sort of warped outsider dystopia that folks like Chrome, Alan Vega, Brainbombs and German Shepards made so alluring.

"Pollard is one of the few creative people on the globe (Romain Perrot aka Vomir is another) who understands that “good taste” is the very death of art, and as such he needs to be cherished like a Siberian Tiger, albeit one whose pelt is made from artificial dayglo blue fur."  Ed Pinsent,The Sound Projector. Horacio's music has been released on Drid Machine - home to bands like Noxagt, No Balls and Sightings.